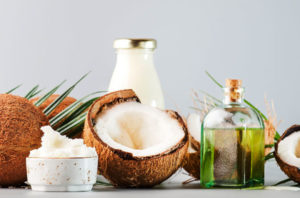 MCT oil is a supplement that has become popular among athletes and body builders. The popularity of coconut oil, high in MCTs, has contributed to its use.

As the name suggests, medium-chain triglyceride (MCT) oil contains medium-length chains of fats called triglycerides. Due to their shorter length, MCTs are more easily digested than longer-chain fatty acids found in many other foods.

MCT oil is most commonly extracted from coconut oil, as more than 50% of the fat in coconut oil comes from MCTs. These fats are also found in other foods, such as palm oil and dairy products

Four different types of MCTs exist, of which caprylic and capric acid are most commonly used for MCT oil. In some cases, these specific types have unique benefits.

Here are 7 science-backed benefits you can get from adding MCT oil to your diet.

Current research is mixed on this issue, but there are some potential reasons why MCT oil may be beneficial for weight loss.

MCT oil has been shown to increase the release of two hormones that can promote the feeling of fullness in the body: peptide YY and leptin

The same study also found a lower rise in triglycerides and glucose with MCT oil, which may also influence the feeling of fullness.

Note that some of these studies don’t take other factors into account, such as activity levels and other calorie consumption. More research is needed.

MCT oil has about 10% fewer calories than long-chain triglycerides (LCTs), which are found in foods such as olive oil, nuts, and avocados

MCTs can also be converted into ketones, which are produced from the breakdown of fat when carbohydrate intake is low.

If you’re following a ketogenic diet, which is very low in carbs yet high in fat, taking MCT oil could possibly help you stay in the fat-burning state known as ketosis

Lastly, your gut environment is very important when it comes to your weight. MCT oil may help optimize the growth of good bacteria and support the gut lining, which could also help you lose weight

2. MCT oil could be a good energy source

Due to their shorter chain length, MCTs travel more quickly from the gut to the liver and do not require bile to break down like longer-chain fats do

In the liver, the fats are broken down to be either used as fuel or stored as body fat. Since MCTs easily enter your cells without being broken down, they can be used as an immediate source of energy

When you’re on a ketogenic diet, MCTs can also be converted into ketones in the liver. These ketones can pass through your blood-brain barrier, making them a source of energy for your brain cells.

3. MCT could reduce lactate buildup in athletes and help use fat for energy

One older study found that athletes who took 6 grams or about 1.5 teaspoons of MCTs with food before cycling had lower lactate levels and found it easier to exercise, compared to those taking LCTs

Furthermore, the study found that taking the MCT oil before exercise may help you use more fat instead of carbs for energy.

Even though MCTs may help increase fat burning during exercise, study results are mixed as to whether MCT oil can help you exercise better

One study showed it could improve swimming capacity in mice, but another human-based study found no improvement in endurance performance in runners

Studies have shown that MCT oil and a ketogenic diet may help manage conditions such as epilepsy, Alzheimer’s disease, and autism

While the ketogenic diet has gained popularity among people wishing to lose weight, it was first introduced as a way of managing epilepsy.

Since MTCs can be converted into ketones, they may be beneficial in managing epilepsy.

However, the type of MCT may be important. One in-vitro study showed that the MCT capric acid improved seizure control better than a widespread anti-epileptic drug

Another study in rats found that the same MCT blocked receptors in the brain that cause seizures, though more human studies are needed

In addition, it’s important to note that a ketogenic diet is not for everyone and can be challenging to follow long term

If you’re considering a ketogenic diet to help manage your epilepsy, talk to your doctor or nutrition professional first.

Alzheimer’s disease impairs your brain’s ability to use sugar

An MCT ketogenic diet offers an alternative energy source: ketones. This could allow brain cells to survive better. It also blocks a receptor in the brain that causes memory loss

One study found that a single dose of MCTs improved short-term cognition in 20 people with Alzheimer’s disease with a certain gene type, specifically APOE ɛ4-negative

While genetic factors play a role, evidence suggests that 20 to 70 grams of supplemental MCTs that include caprylic or capric acid could modestly improve the symptoms of mild to moderate Alzheimer’s

Overall, the benefits of MCT oil in Alzheimer’s disease are promising, but longer and larger scale studies are needed

Because autism is a spectrum condition, it can affect people in different ways.

This means that adding MCT oil to your child’s diet may help to varying degrees or may show no effects. More research is needed here, as well

If you’re considering a ketogenic diet to help manage your child’s autism, talk to your doctor or nutrition professional first.

MCTs have been shown to have antimicrobial and antifungal effects

Coconut oil, which contains numerous MCTs, has been shown in an older in-vitro study to reduce the growth of Candida albicans by 25%. This is a common yeast that can cause thrush and various skin infections

Coconut oil’s ability to reduce yeast and bacterial growth may be due to the caprylic, capric, and lauric acid in MCTs

However, note that most of the research on MCTs and immune support has been conducted via in-vitro or animal studies. High-quality human studies are needed before stronger conclusions can be made.

Some factors that increase your risk for heart disease include:

MCT oil has been shown to support weight and fat loss. This may, in turn, help reduce your risk for heart disease

A study of 24 overweight men found that taking MCT oil combined with phytosterols and flax seed oil for 29 days reduced total cholesterol by 12.5%. However, when olive oil was used instead, the reduction was only 4.7%

It can even significantly reduce C-reactive protein (CRP), an inflammatory marker that increases the risk for heart disease

Additional older studies found that MCT-oil-based mixtures can have a positive effect on other heart disease risk factors, as well

MCT oil may also have benefits for those with diabetes  MCTs have been shown to reduce fat storage and increase fat burning, which can aid in managing the condition

Another study found that when 10 people with diabetes were injected with insulin, they needed 30% less sugar to maintain normal blood sugar levels when they consumed MCTs, compared to LCTs

However, the same study did not find any effect of MCTs on reducing fasting blood sugar levels

Therefore, other factors such as timing and the amount of food eaten may influence the effects of MCT oil.

A study involving people with anorexia found that MCTs increased the release of two hormones that stimulate appetite: ghrelin and neuropeptide Y

People who took more than 6 grams of MCTs per day produced more of these hormones than those who had less than 1 gram per day.

However, it’s unclear whether the increase in these hormones actually causes you to eat more.

High doses could lead to fat buildup in the liver

High doses of MCT oil may increase the amount of fat in your liver in the long term.

One 12-week study in mice found that a diet in which 50% of the fats were MCTs increased liver fat. Interestingly, the same study also found that MCTs reduced total body fat and improved insulin resistance

Keep in mind that high doses of MCT oil, such as those in the study above, are not recommended. Overall, more research is needed on the long-term effects of MCT oil.

MCT oil doesn’t currently have a defined tolerable upper intake level (UL). But a maximum daily dose of 4 to 7 tablespoons (60–100 ml) has been suggested as a safe upper limit

For starters, they contain fatty acids that could promote weight loss by reducing body fat, increasing fullness, and potentially improving your gut environment.

MCTs are also a source of energy and may fight bacterial growth, help protect your heart, and aid in managing diabetes, Alzheimer’s disease, epilepsy, and autism.

Remember, though, that whole food sources may provide additional benefits over supplements.

Potential drawbacks may include increased hunger and possible fat accumulation in your liver.

Talk to your doctor or nutrition professional about the benefits and risks of adding MCT oil to your eating plan.